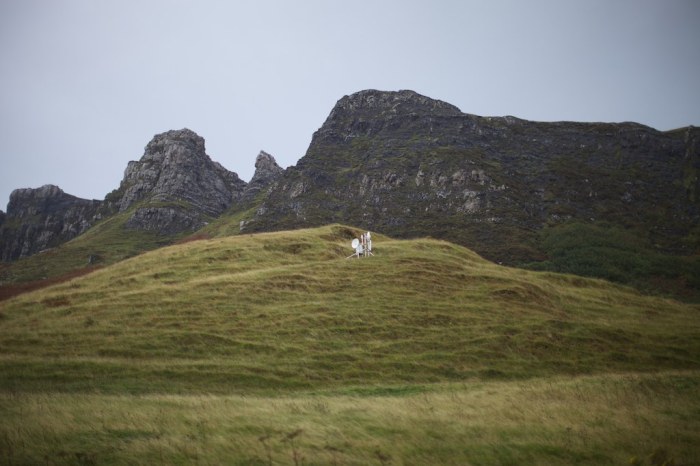 Last month I spent a week on Eigg, a small island in the inner Hebrides (as part of the latest Devfort).

The island has between 90-100 inhabitants, depending on the season. Its not isolated – theres a ferry to the mainland twice a day – but it is remote.

Because of this, the island has to be almost completely self-sustaining.

There are few pipes, cables or wires that connect Eigg to the mainland. And apart from food – which is mostly imported – and rubbish & recycling – that goes back the other way – Eigg produces most if the things it consumes.

Eigg isn’t a utopia of self-sustenance. Most of the islands utilities are built and managed by resident co-ops, but people on Eigg don’t share any sense of “purpose”. They just need electricity, water, waste disposal and the internet. Unlike the rest of Scotland though, they have to build it themselves.

Few industrialised products or services can survive with only 90 customers, so the island is often too small to be a commercially viable source of revenue for anything for very long, making it seem out of scale with the rest of the world.

I spent a week walking around the island with Mark Hurrell, James Aylett, Ben Firshman. Talking to people, looking at stuff, and thinking about the ways that this relative scale shapes what and how things work on the island. How Eigg has become a self-sustaining network of people and things.

The result will be three films. This is the first one.

We’re the two percent of the one percent.

Simon Helliwell (who also runs the B&B we stayed in) founded Hebnet in 2010 with the help of a University of a Edinburgh project that helps rural groups set up local networks by accessing leased line ’backhaul’ from the mainland and distributing it around the island.

Before Hebnet was created, Eigg and the other small isles were served by a succession of US based satellite companies who would beam signal to a chain of relay points on the island. These relay points were powered by the nearest house, meaning that – because there was no centralised electricity grid at the time – if your neighbour ran out of fuel or switched off their generator, parts of the island lost their internet connection.

The satellite companies often went bust, presumably because their service was a based on a precariously balanced chain of delivery that they had no control of, save for a temporary monopoly, so neither the residents or the business on the island could rely on internet access. Hebnet now a fully operational co-op, distributing network speeds faster than you’d get consistently in most UK cities.

Simon Kindly agreed to be interviewed on the Ferry back to Mallaig, where he talked about the need for community run start-ups in a world where Eigg is too small to be commercially profitable for outside companies.

[Hebnet](http://www.hebnet.co.uk/page21.html) have a full write up of how they got started and how their networks put together (including the relay point on the village church. Its worth a read) as do [Tegola](http://www.tegola.org.uk/section-36.html), the Edinburgh project they’re supported by.

Up next: Eigg’s shopkeeper on ‘prediction’, and stock affordances needed to supply an entire island.